My take on the various Brexit votes in the House of Commons this week. This appeared on Broadsheet earlier today (March 13, 2019) 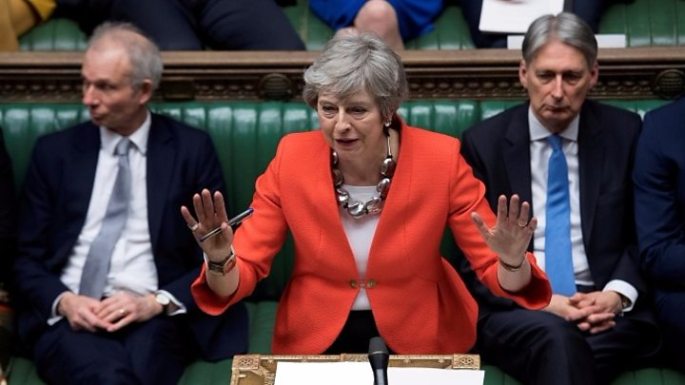 Over the past few weeks we have seen a parade of British pro-Brexit talking-heads confidently telling us that the EU/UK Brexit negotiations “will go down to the wire” and that Brussels will do, what they claim it always does, and make a deal at the very last minute.

David Davis was at it before he became Brexit Secretary and has continued at it since quitting the job. Ian Paisley Jr MP was at it on Newsnight last night, asserting that the EU “…are the kings of the last-minute fudge.”

How I wish that trite political phrases such as “going down to the wire” could be expunged from every politician’s lexicon.

So it is with negotiations. They end when they end. It is hardly surprising that most negotiations go right on to the deadline you set. It is called a deadline for a reason, both sides knew it was the time framework they work within it.

There is even less depth to the phrase when it comes out of the mouths of Brexiteers because it only confirms that they haven’t (i.) realised that Brexit is not a negotiation and (ii.) bothered to find out how Article 50 works.

In a classic negotiation two parties enter talks with the mutual intention of finding a deal that will be better than their current situation. They will argue where that balance lies, but their aim is mutually benefit. This is not the case with Brexit. It is a damage limitation exercise.

There is no outcome whatsoever which can leave the UK having the same advantages, benefits and market access outside the EU as it had inside it.

This is why Britain has no leverage. It has had no leverage since the moment Article 50 was triggered, but the leadership of the Tory party, and regrettably the Labour party have stubbornly failed to grasp this fact.

Similarly, British political leaders never stopped to read the EU treaties and learn how the exit process works. Even to this day serious political players and pundits in Britain fail to understand that there is a two-stage sequence. First, comes the divorce arrangement, i.e. legally binding terms of for the withdrawal, which is followed the framework for the future relationship between the UK and the EU.

This may help explain why with just two weeks to go and after two years of talks, we are still arguing over one of the three key elements of the divorce: citizens’ rights, UK’s financial obligations and the Irish Border.

Yet countless British politicians keep asking about why they can’t have a discussion on the future relationship. Did none of them bother to read the rules set out in Article 50 of the EU treaties before triggering it, not to mention before having a Brexit referendum.

So, after a day of shuttle diplomacy… no, scrub that… a day of political theatrics, following by a day of Westminster shadow boxing, we move on to today’s House of Commons vote on eliminating a no-deal.

Not that the British Prime Minister intends to show any leadership on it. Within moments of her second big defeat last night Mrs May was on her feet to tell MPs that while she would be tabling a motion to rule out a No-Deal Brexit she would be giving her Ministers and MPs a free vote on it.

With this move she eschewed her responsibility to lead (and whip) as many Tory MPs as possible to vote to rule out a no Deal Brexit. Instead she will wander in alone and wait to see who meanders in after her.  She is putting the pretence of Cabinet and Tory party unity before national interest, a move that could see the scale of the predicted majority slide, though not enough to scupper it.

By not imposing a whip she has removed the protection of the whip from MPs who know ruing out a no-deal is right, but who fear the wrath of their hard-line activists back home – especially with an election looming. This may allow these MPs, who would otherwise have followed her as a whipped act of party loyalty, to instead head for the pro-no-deal lobby along with the couple of dozen hard-line Tory Brexiteers who still believe a no Deal Brexit is a good outcome.

There they will also find the DUP – again voting against the interests of their Northern Ireland constituents – along with an assortment of Tory ministers and ex ministers, including Boris Johnson who yesterday urged his colleagues to back a no-deal Brexit claiming it was “…the only safe route out of this and the only safe path to self-respect”.  While this is vapid jingoistic claptrap, it may yet be the type of claptrap that sees him installed as the next Tory leader.

Also, in that No-deal lobby will be another, slightly larger cohort of Tory Brexiteers who think that voting to take no deal off the table injure Britain’s supposed negotiating position with Brussels, believing that the no-deal threat must be kept alive in order to win even more concessions from the EU27.

This is the cohort that most loudly chants the “down to the wire line” while ignoring what Barnier, Tusk, Juncker and others have told them over the past 24 hours. This group potentially includes Cabinet Ministers, like Andrea Leadsom, Sajid Javid or even Michael Gove.

Is keeping these folks in a Cabinet that is already beyond being merely dysfunctional really a price worth paying? Theresa May thinks so, but as we have seen over the past two years, her judgement on any of these matters is not to be trusted anymore. British politics is truly broken.